The Southern Cross is a small yet brilliant star constellation.
It can be viewed from various countries.
It is a pattern of stars in the Milky Way galaxy.
It is the easiest constellation to identify in the Southern sky.
And it has served many sailors as a navigational beacon.
The Southern Cross has also played an important role in many cultures.

Australia.
The Australian observatory in Coonabarabran is the best location to see this constellation of Stars.
The Australian flag represents our place on Earth as depicted by the five stars.
These include the four 7 pointed stars representing Alpha, Beta, Gamma and Delta.
Plus one smaller 5 pointed star called Epsilon.
In fact there are thousands of other stars that we actually cannot see.
Video: Southern Cross Jewellery ☼ 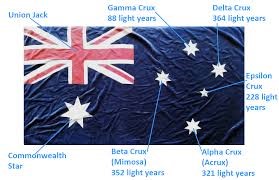 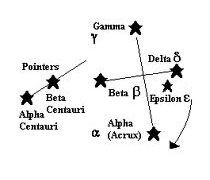 Image by CSIRO.
The Southern Cross is heartfelt in Australia as reflected by their songs, ballads, poetry, art and the use of its name for newspapers, hotels and other companies.

Under the Southern Cross
is the Australian cricket team’s victory song and is chanted after each test victory.

Flag of the Southern Cross
is a poem written by Henry Lawson in 1887 and refers to the flag flown at the Eureka Stockade.

Our own Flag is a poem written by Banjo Patterson which recites the words:
“And the English flag may flutter and wave where the world wide oceans toss.
But the flag the Australians die to save is the flag of the Southern Cross”

Southern Cross is a bush ballad containing this beautiful verse:
“The Southern Cross will lead me home if I should ever stray.
Its guiding light will help me through and see me on my way”.
The Australian Aboriginals may be the world’s oldest astronomers.
And the animal spirit perspectives shared by the indigenous groups varies.
But the one that resonates with me the most about the Southern Cross is that the constellation is a
sky God in the form of an eagle.

New Zealand.
The Southern Cross is visible all year round in beautiful New Zealand.
4 stars appear on their National Flag and the Maori believe it to be the anchor of a great sky canoe.
They believe it is part of the Orion’s belt constellation and call it Mahutonga (5 points).
Hawaii.
The only place in the USA that you can view the Southern Cross is on the big island of Hawaii.
It can be seen looking South in the months of May and June only.
This is because at other times of the year the curvature of the Earth is in the way.
In Hawaiian culture the cross of the constellation is also an anchor.
It is named Hanaiakamalamo which means “child of the moon”
Latin America.
In the Ancient mountaintop village Machu Picchu, the constellation is depicted in a stone engraving.
In Incan mysticism it holds deep symbolic value as the cross represents the three tiers of the world.
These tiers are the heavens, the world of the living and the underworld.
South Africa.
The well known Christmas carol Summer Christmas Somerkersfees song in Africaans starts with the lyrics
“Enter in quiet peace filled night beneath the Southern Cross”.
In South Africa the medal of the Order of the Southern Cross is awarded to remarkable citizens who display exceptional achievement.
One is Chris Barnard for performing the first heart transplant in the country.
The others are Oliver Tambo and Chief Luthuli for their contribution to struggle for liberation.
Southern Cross Jewellery ☼ 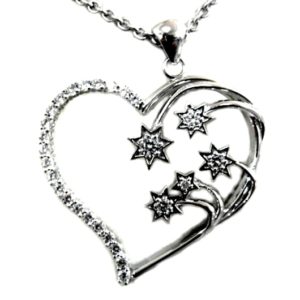